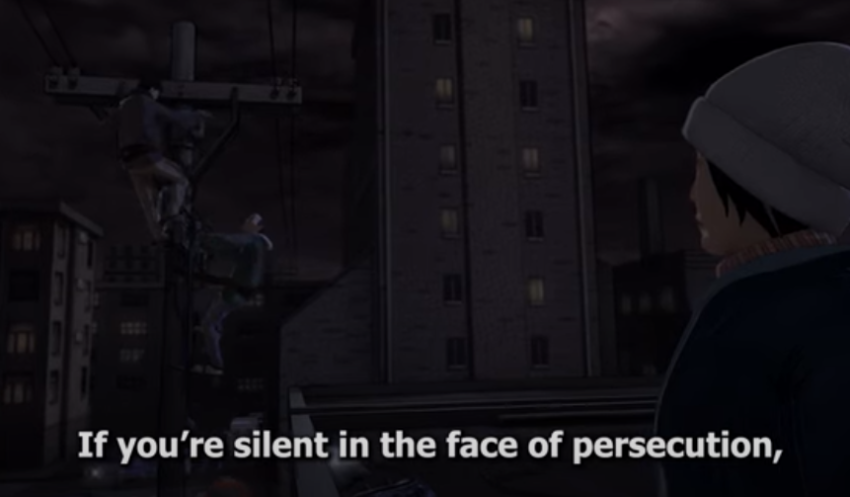 Eternal Spring is a new documentary about the Falun Gong movement’s struggle against oppression in the Chinese city of Changchun, which translates to “Eternal Spring”. The story centers on a group of Falun Gong practitioners who pull off a dangerous conspiracy to hijack Chinese state TV in Changchun to set the record straight on their spiritual practice which the government is persecuting. The film intersperses graphic-novel-esque 3-D animations with documentary tape of the artist Daxiong as he meets other survivors from Changchun. Together, as they piece together their (often painful) collective memories of what transpired, Daxiong sketches these remembrances, which fold back into the animated history.

According to Britannica, the Falun Gong movement was allowed to flourish in the 1990s as qigong, a form of traditional Chinese medicine, had temporary support from the Chinese medical community. But, the movement, with its touch of religion, became a locus of power that the authorities began to fear. In Eternal Spring, the bravery and determination exhibited by the TV hijackers demonstrate the power of Falun Gong beliefs in the hearts and minds of its practitioners. The film depicts the leader of the hijacking operation, a man named Liang, as a creative direct-action activist, using the limited means at his disposal to keep the idea that “Falun Gong is Good” available to the people of Changchun. In one exploit, he uses helium balloons to hoist a banner with this message. When the state enforcers appear to stick a pin in the balloons, a burst of pamphlets fall out onto the streets. The pamphlets were in the balloons. If one avenue was closed, Liang would find another way to get out the message.

The film provides grist-for-the-mill in thinking about how quite poor people, poorer due to persecution they had already faced, stand up against a totalitarian system. The movie opens with multiple scenes of police chasing, arresting, and beating (in front of their families!) people suspected of involvement in Falun Gong. The state TV routinely repeats the propaganda line against the group, making the general public hostile to group members. Several of the conspirators have already spent time in prison for their expression of their beliefs. Liang’s proposal to hijack the TV signal is greeted with reservation by sincere activists who know the danger of what they are about to do.

The first danger is to be discovered during the planning or execution of the operation. In fact, just prior to the operation, Liang is abducted by thugs, plain clothes secret police or perhaps members of the Triads working for the secret police, who torture him for information about his group’s activities. The hijackers have faith that Liang won’t break and give away their plot, so they continue. In order to get their message to the entire city, the hijackers must cut two communication lines and the disruption of either will alert the authorities. There is a great deal of tension surrounding the coordination and timing. Moreover this activity is exposed on the street and involves physical courage and technical wherewithal.

And of course, the consequences of succeeding are probably greater than failing, as the loss of face for the Chinese Communist authorities must be brutally punished. Any crack in the wall will invite more dissent. That’s why it seems to be a feature of totalitarian systems that there must be a progression to controlling more and more of human action including what people are allowed to think and express — any subversion is an intellectual doorway to further erosion of absolute authority. And this is why the Falun Gong people are dangerous to the Chinese Communist Party, because the power of their inner strength grounded in the ethereal is outside of the control of the CCP’s material inducements: hunger, prison, torture, and death.

The successful mission that was carried out by Liang’s team might not be feasible today. The tyrants invest in better tools for tyranny. The decline in cost of cameras, and the advance in digital surveillance tools (including artificial intelligence) allows for a much lower cost static dragnet. The pervasive use of smart phones, and those phones communicating with all-in-one apps for social media and digital payments has even further exposed the people of China to the watchful Eye. Yet, a simple banner hung from a highway overpass in Beijing recently shows that there are still extremely brave people defying Xi Jinping and his gang of thugs.

And for those of who have the freedom to do more, let’s take that opportunity to speak and act.

Leave me a Voicemail: